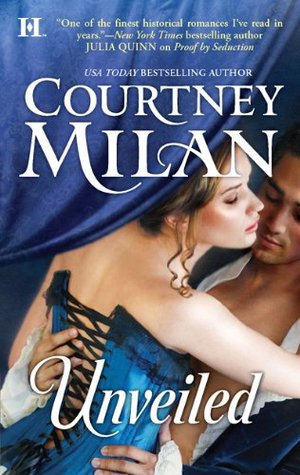 Description:  Ash Turner has waited a lifetime to seek revenge on the man who ruined his family–and now the time for justice has arrived. At Parford Manor, he intends to take his place as the rightful heir to the dukedom and settle an old score with the current duke once and for all. But instead he finds himself drawn to a tempting beauty who has the power to undo all his dreams of vengeance….

Lady Margaret knows she should despise the man who’s stolen her fortune and her father’s legacy–the man she’s been ordered to spy on in the guise of a nurse. Yet the more she learns about the new duke, the less she can resist his smoldering appeal. Soon Margaret and Ash find themselves torn between old loyalties–and the tantalizing promise of passion….

Review: I really cannot fault Courtney Milan. In all her novels I have read so far she has consistently delivered an engaging read with believable characters, and stories with just that little extra twist to them that turns them into a breath of fresh air in the romance genre.

This novel had Mills & Boon plastered all over it (Harlequin for the US people). To me that normally means that you get an entertaining few hours which won’t blow you away, and which will give you a few moments of mild annoyance because the characters don’t talk to each other when they would clearly resolve all their differences by doing so. Once you finish reading it you stick it in the pile of books to give to your friends to read, or to a charity shop, because they’re not books to read more than once. When you consider that standard, this book stood head and shoulders above that.

The book has some of the standard romance tropes. Our hero, Ash Turner, takes one look at our heroine, Margaret Dalrymple, and decides that she will be his. Except then you find out that this is how Ash works. He has an instinct for things, a way of knowing that this is what he needs to do right now, because it will bring him profit. It has taken him from his impoverished origins to his current status as successful businessman. He is also a distant relative of the Duke of Parford, a man who once refused the help Ash required to save his sick sister, and ever since then Ash has sworn revenge on the callous man who condemned his sister to die.

This revenge is made easy by the fact that the Duke has married twice, and never bothered to have the first marriage annulled. Ash exposes this fact, thereby instantly demoting Parford’s three children to bastards. As the only remaining relative the Dukedom will revert to him, provided that Parliament does not decide to pass a bill to legitimise Parford’s children. One of those children, Parford’s daughter Margaret, has remained behind on the estate in the disguise of a servant so she can spy on Ash and discover incriminating evidence that will harm his case before the Lords.

It is an intriguing premise, and sets an intricate backdrop for the developing attraction between Ash and Margaret. Ash is a complicated man, driven by his instincts and a burning desire to give his two brothers the best possible life, even if his brothers don’t appear to be too bothered about it. He also loathes Parford and his sons, and never stops to think what bastardy will mean to young men who are used to the luxuries of nobility.

Margaret, in turn, is determined to hate the usurper, but finds herself unable to resist his relentless ability to be liked. She is also torn between loyalty to her brothers and her growing realisation that Ash would probably be a better Duke than her eldest brother will be. Not just that; Ash treats her like she matters, when from her father she gets nothing but contempt, and from her brothers little more than absentminded affection.

The motivations of these characters are utterly believable, and the resolution is nothing short of perfect. An absolute gem of a romance which will not disappoint.

One thought on “Unveiled ~ Courtney Milan”