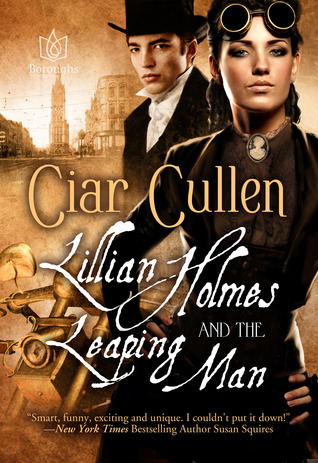 Description:  At the cusp of the twentieth century, an heiress turned detective enters a world of deception and danger and must learn to trust her nemesis with both her life and her love.

Tormented by a tragic past, Miss Lillian Holmes nonetheless found the strength to go on, to become the greatest female detective of her time. To make her uncle proud. Except…he was not truly her uncle. Sherlock was a fictional character, and Lil was less a true detective than a sheltered twenty-six year old heiress with taste for mystery…and morphine. But then she saw him. Leaping from her neighbor’s second-story window, a beautiful stranger. With the recent murders plaguing Baltimore, here was a chance to
reveal the truth.

Except, the Leaping Man was far more than he seemed. A wanton creature of darkness, an entry point to a realm of deception and evil, and to a Truth she had waited countless years to uncover, he would threaten far more than Lillian’s life. He would take both her heart and soul. And she would rejoice in it.

Review: I have a confession to make: I don’t like vampire novels. I believe that the Twilight craze has unleashed a barrage of vampire-driven tripe by authors jumping on the vampire bandwagon. As such I am rather puzzled at myself for getting and reading this book, since it is a vampire novel, and anything else I say in this review should be seen in the light of me severely disliking vampire novels. I also owe the author an apology for reading this when I knew in advance that I might not like it.

Have I made it absolutely clear that I do not like vampire novels? Good, then on to the review.

Lillian Holmes is a wealthy, twenty-six-year-old heiress who is being looked after by her governess, Addie, and Addie’s brother. Lillian’s parents died when she was sixteen, and since then she has been a little unstable. She is addicted to morphine and slightly delusional, believing herself to be the niece of the great Sherlock Holmes, despite knowing that he is a fictional character. This is one of the things I liked about this book – you don’t often get a drug-addicted protagonist, and it makes for a refreshing change.

One night when Lillian can’t sleep she looks out the window and notices a man leaping down from the second floor balcony of one of her neighbours. The next morning it is discovered that one of the inhabitants of that house has committed suicide, but Lillian realises that it was murder, and that the Leaping Man must be the perpetrator. It is her chance to prove that she is as great a detective as her ‘uncle’, and she is determined to solve this case.

We soon discover that the Leaping Man is George Orleans, a jaded vampire who is tired of vampire politics and who is trying not to interfere in the life of his brother Philip. Philip is also a vampire, but he is a bit of a romantic who only kills and drains rogues and criminals to appease his fiancée Kitty, who is not a vampire.

What I liked about George is that he is a ‘proper’ vampire. He doesn’t sparkle, he weakens in daylight (okay, it’s not quite dying, but it’s getting there) and he feels little to no remorse for feeding on random people. None of it is watered down – there is no real attempt to justify what he does, and that too is refreshing.

The plot of the book kept me hooked enough that I read it without effort. It has a dash of different styles, ranging from romance through mystery to urban fantasy with a smidgen of steampunk thrown in. The dialogue didn’t entirely convince me at times, but on the whole there was enough to keep me entertained, though not bowled over. In summary, this is a solid read, and anyone who does like vampires should probably add at least one star to this rating.

One thought on “Lillian Holmes and the Leaping Man ~ Ciar Cullen”