I love and thrive off of endurance events. Long mileage. But all mileage isn’t equal, all 20 mile runs aren’t the same, and all 1,216 page books aren’t as heavy.  I just finished Storm of Swords, or as I think of it, Game of Thrones part 3, and it was 1,216 pages. Longest book I’ve read,  I think, surpassing The Historian which is a high-brow, artsy Dracula story I read entirely on the toilet.  But I carried this recent book with me wherever I went.  I read it in three time zones, three countries (USA, Mexico, Jamaica) and inside of four airports (Flint, Detroit, Atlanta, Houston) but all of it was in a state of wonder and intrigue.

I’m trying to keep up with the HBO series, and I stick to the adage, ‘book before movie’.

I’ve had my share of dungeon and dragons 20 sided dice in my hand, so I let my Geek flag fly. This series is full of high drama. It’s been called Sopranos meets Lord of the Rings.  Every human trait across the spectrum is magnified. Treachery and beguile, bravery and honor.  The characters are rich and divinely human.  The story doesn’t read as much as fantasy as it does detailed, historical fiction.

But after the first major death in the first book, what I have realized is, their deaths make their lives stronger. The way they died, and at whose hands, ripples through the 7 kingdoms showing the extent of their influence.  In fact, when King Eddard died, I have likened it to God being killed, since he is the most moral and steadfast of all, and the rest of the books are simply the lesser humans running around and bumping into each other trying to make their way in a Godless world.

So, I will be watching closely at the Season 3 opener. I can’t tell if the HBO series is even worth watching without having read the books because I think of it more as a companion to the novels rather than it

When I get to choose my magic super power, or if I rub a lamp and a Genie comes out with just one wish, it may be to bring a literary character to life, and I will be choosing Daenerys Targaryen, mother of Dragons.

And I want my daughter to act like Arya and marry a man like Jon Snow (she already tells me “you know nothing, daddy” so it’s a perfect match.)

On the same night Game of Thrones begins, there’s the season finale of The Walking Dead.  Another high drama, more pop-culture but deliciously packaged series.  Like Game of Thrones, people die. Yes, they have important people die.  Their deaths are felt long after they are gone, Sophia and Shane, for example.  And how they die, and at whose hands, is as significant as how they lived.

This is perhaps most evident when Darryl Dixon, bad-ass Darryl with the sweetest of hearts, has to off his brother in a memorable list of fratricides with Cain and Able at the top.

And here’s where I get artsy.

Notice that Darryl doesn’t use an arrow? Anybody else think this isn’t significant? Darryl shoots everything with his crossbow. An army of Zombies have died with his arrows.  But not his brother Merle.  First Darryl kicks him, then he pushes him, angry at him for becoming a zombie, and saddened with the burden of having to put his brother down. Then he chokes him, and you get the feeling he’s reliving all the abuse he’s had at his brothers hands, only this time he’s the one overpowering his tormentor.

Finally he knives him… a final cathartic release of his rage. His beloved brother has turned, and now he can definitely never feel the closeness he had hoped for. Angry at his brother for being an ass, angry at wanting to be close to him, as if Merle were the surrogate father.

There’s no way an arrow to Merle’s head would have let Darryl have had this cathartic experience.

One last note. If I’m Michonne, I’m taking my sword and swinging it through Rick’s neck, I don’t care if he changed his mind.

Important people die, but how they die, and at whose hands, says as much about them as how they lived.

Mark Matthews is the author of STRAY and The Jade Rabbit. You can find out more about Mark and his work on his website: Running, Writing, and Chasing the Dragon.

In the random and tangential way of my life, I came across a tidbit of information and ran with it to see where it’ll go. I admit that I’m a fan of Whedon and I tend to enjoy the shows he makes. I mean, Firefly and Serenity are only a few of a long list to love. Let’s not forget old goodies like Buffy the Vampire Slayer and Angel. There are a slew of shows and movies on television and theaters that I’ve watched and enjoyed immensely.

Now there’s Much Ado About Nothing, a Shakespeare adaptation film that premiered at the Toronto International Film Festival 2012 and will have limited release in 2013. I never quite know what to expect from a Whedon project. This one is tagged as a Comedy, Drama & Romance. By that, I’m guessing that I’ll have equal moments of laughter, snickering and maybe an Aw moment or two.

Here are some interesting things I found out about the movie:

I can’t wait to see this movie! I’ll be sure to share my two cents on it once I’ve had a sit down with it in a dark & booming room.

Jack the Giant Slayer is playing in the movie theaters now, and Irate Izzy & I went to see it this weekend. It’s yet another story adaptation turned into a big film. We didn’t expect a lot from the movie. We only expected to see a lot of cool costumes, sets and entertaining computer graphics. The movie was all of that and more!

If you’re not familiar with the old fairy tale, Jack and the Bean Stalk is about a naive kid who accepts a pouch of magic beans instead of money. He gets in trouble for it and the beans are thrown out of the window. Surprise! The beans really are magic and a huge beanstalk grows up high into the sky. Jack climbs the beanstalk to see where it goes and starts a dangerous adventure into a land of giants and more.

The movie is a great adaptation of the story! The most important elements are kept in tack and the additions make for a lively character development, hilarious hijinks and awesome fights! 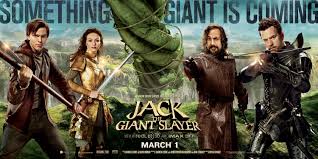 Izzy: My favorite part are the flaming, flying trees of DEATH!!!

Izzy: It was better than the Ent Battle in Lord of the Rings! Because that battle sucked! That particular battle doesn’t compare to the one in Jack. The Ent battle–

Soo: For those who don’t know, you mean the Tree creatures.

Izzy: Yeah! Like I said, the Ent battle sucked because of the angles and scales were BORING!

Soo: You mean the wide angle viewpoint? Action happening so fast you don’t have time to register the first batch of soldiers being hit before seeing another one being propelled into the castle wall by a flying boulder?

Izzy: EXACTLY! That’s what I wanted from the Lord of the Rings! Several consecutive moments of Holy Shit! LotR should have capitalized on that and didn’t. Jack did and my expectations were exceeded!

Soo: I really liked the honeycomb of bees trick! I was totally there with the characters, wondering if it was going to work or not and, MAN, when it DID work–even knowing what was going to happen, it was still hilarious! The look on the giant’s face when he’s stung! **laughs**

Izzy: Boy, those were some of the dumbest and ugliest giants I’ve ever seen!

Soo: Talking about oogly. Jack needs a better haircut! What’s up with that??!?!

Izzy: Yes he does! If you have a weird face shape, you should try to minimize the flaw! Not put a giant, flaming neon arrow pointing to your face!

Soo: Yup! Agreed. He’s good looking but you have to cut the hair out of the picture to see it. Or cover it with a hoodie, like he did in Warm Bodies.

Izzy: Speaking of neon signs. Did anyone else notice the visual subtext?

Izzy: The King had a shiny, gold crotch! Nothing says look at my crotch like a glimmering, shimmering gold chain mail metal over your junk. I’m not saying that gold armor isn’t the way to go. It was a cool costume. I mean. Cool for a costume that is MADE to make you look shorter. Just saying, if you want to say you’re still a virile man on the battlefield, you should consider putting some GOLD glitter on your junk! Just sayin’! **laughing**

Soo: Haha! The costumes were great! I really liked the Captain’s armor and the Princess’ outfits. AND who doesn’t love that huge, royal cloak in the throne room?

Izzy: Oh my god, that cloak is hilarious! So many priceless and well timed moments in the movie. Good sound effects, one liners and action sequences that highlighted the movie in a clever fashion. And Ewan McGregor (the Captain) still looking good! I liked the way he filled his armor.

Soo: Are you sure you’re not upset that you didn’t get to see his naked chest?

Izzy: Only a little bit but his costume was badass enough to make up for it. It was pretty hot! My knight in shining armor has a new look and it’s not the King Golden Crotch.

Soo: There you have it! Jack the Giant Slayer is a fun, action movie with great battle scenes, good acting, solid story adaptation, humor and skillfully woven CG with real time footage.