Description:  The pleasure of going to the local pub or craft brewery for a pint and a delicious meal can now be recreated at home with John Holl’s collection of 175 recipes that all taste amazingly great with beer. From pub grub and barbecue to regional specialties and even breakfast fare, many of these dishes use beer as an ingredient, and all of them can be paired with your favorite brews. The recipes were contributed by brew pubs, craft brewers, and other beer lovers across the United States, and you’ll love the new twists on traditional favorites, such as Slow-Cooked Dopple Bock BBQ Meatballs or Chicken Wings with Bacon BBQ Sauce, as well as wildly unexpected recipes like Beermosas, Beer Ice Cream Floats, and Chocolate Jefferson Stout Cupcakes. Holl even includes 12 recipes for brewing your own beer at home.

Review:  This is a bit of a departure for me to review a cookbook, as I typically review fiction. However, being a bit of a foodie and a total beer snob, I was eager to get an advanced look at this title and throw in my two cents. I got to opportunity to get my hands on a digital advanced review copy through Net Galley.

My first impression is that the images in the book are stunning. Does this say anything about the content of book? Not really, but in a way it does. It says to me that this book is a labor of love and someone put in the effort to do it right. Oddly, the cover presented on the ARC is only so-so, considering the quality of the imagery throughout the book. My main problem with the cover is that the visual impact says “super bowl party,” whereas the contents of book cater to the connoisseur.

Don’t let the premise of this book fool you. The author may be sharing recipes from brew pubs, but they are far from standard pub fare. The result is that the beer suggestions AND the recipes both have true foodie appeal. From breakfast to dessert, sauces to side dishes, the book covers all of your major dining categories. Some of the recipes use craft beer as in ingredient, but many are just a great compliment a tasty brew.

There are so many recipes that sound great, but here are a few that really make me salivate:

The layout of the book is both visually appealing and easy to digest. Each recipe has information that is distinctive, so you can tell whether it is an ingredient list, instructions, beer suggestions, or general information about the recipe and/or brewer. The beer suggestions are particularly nice, offering specific brand suggestions as well as broad categories for each recipe. The profiles for the brewers/brewpubs provide great information providing in a witty tone of voice.

The book ends with some great reference information for the craft beer lover. The reference to all of the brewers and chefs featured in the book provides and easy way for readers to look up their favorite beer and recipes when travelling. There is also a fun road trips section, although a true craft beer travel guide could fill volumes. The beer festival list is a bit weak, there are SO many festivals and so few referenced in the list. I was hoping to see a recipe index included in the back of the book, fingers crossed that they include one in the final version that goes to press.

This is the first cookbook in a long time to peak my interest. These days, I am much more likely to look online for cooking ideas. The American Craft Beer Cookbook appeals to more than just my inner culinary genius, it also engages my interest in craft beer. The book has enough also has enough visual appeal to become a coffee table book, rather than just being relegated to my cookbook shelf. The suggested price of $23.95 is a great value.

*DISCLAIMER: This book was provided to me at no cost by the publisher as an advanced review copy through Net Galley.* 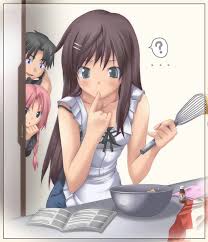 For the past week or so, I’ve been having a sweet tooth craving. It’s not enough to drink a glass of juice or grab a can of Coca Cola. Nope! I need something that’s more in the area of dessert:  sweet, potentially unhealthy & just damned tasty! If we’re being bad, I’d totally give Irate Izzy the crazy grin and start talking about chocolate chip cookies. She makes awesome cookies! But it’s never a small batch and we’ll eat it like it’s going out of style! Yup! Totally pig out on delish cookies.

Well, I thought I’d try to stay away from the amazingly evil cookies by trying another food experiment. I’m a great cook! I can make a decent meal by walking into anyone’s kitchen. As long as there are enough edible items in the house to throw together into a meal.

RULE:
What’s available to cook with in the house? Putter around, grab ingredients, let ideas tumble and whip up food from the chaos!

Note:  I’m a great cook. I have no qualms about this. It’s a fact and runs in the family. However, as a baker, I am a total amateur. I accept this. Maybe I hit intermediate level. I no longer have to look up recipes (to not really follow them) and fudge around to create something.

A few days before this particular experiment, I had a craving for doughnuts and made tasty pancake-doughnut-crepe things. Super tasty and really easy to mix & fry. Initially, I planned to make something similar but the box of Oreo pudding mix caught my eye and plans were altered a wee bit!

The following recipe that I’m sharing with you is made up of the real ingredients I used but the amounts are hypothetical guesses that should work (more or less). If you feel adventurous, give it a whirl! I plan to make another batch either tonight or tomorrow.

Final product will be a light to hold, yet hearty cake bread. The sweetness and chocolate flavor is a subtle under layer that teases the taste buds but doesn’t overwhelm. Good to eat by itself or with other stuff.

You know you were just DYING to see a recipe on Silk Screen Views and you got it! You have to understand that I never make anything exactly the same way because I use what I have at hand and some of those things are not the same. I don’t follow recipes for the most part. Even if I look one up, I’ll experiment with the process. For SSV’s first recipe, I bring to you Spicy Meatballs! It’s a favorite dish that I’ve cooked up for a group of friends in NYC. They’re all musicians and I’ve had the pleasure to hear them play and dance to their tunes. This dish was such a hit that I was asked to recreate it several times and to figure out how I did it in the first place.

Meatballs:
1) Pour good bit of mushroom soy sauce, grind healthy portion of Everyday Seasoning, some honey, large dollops of Sweet Chili Sauce, and mix the ground beef, eggs, half the onions/garlic, and stuffing together.
2) Make meatballs.
3) Heat up deep frying pan with about 1 inch of vegetable oil.
4) Fry meatballs until brown and remove onto plate/pan to cool & lose excess oil.

For the Sauce:
A) Start the heat on a pot on med-high.
B) Pour in the cans of tomato, onions, garlic, minced red peppers, mead & vodka into the pot.
C) Add Everyday Seasoning, Basil, Oregano and a large spoonful of Korean Red pepper paste.
D) Bring the sauce to a boil and then cut down heat to a shimmer and cook for 15-20 minutes until the tomatoes become very mushy.
E) Add meatballs & mix well with the sauce.
F) Bring to an almost boil and then cut down heat to shimmer.
G) Let it all cook for about an hour to hour & half until the sauce is absorbed by the meatballs and becomes thicker.

That’s more or less the way I did it. Except my meatballs sat in the sauce for 5 hours and then heated back up instead of cooking for an hour+ to set the sauce. Want to see what it looks like? Look below! If you try the recipe, let me know how it goes! You can email SSV a shot of the results.