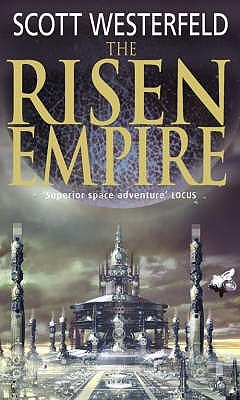 The undead Emperor has ruled his mighty interstellar empire of eighty human worlds for sixteen hundred years. Because he can grant a form of eternal life, creating an elite known as the Risen, his power has been absolute. He and his sister, the Child Empress, who is eternally a little girl, are worshiped as living gods. No one can touch them.

Not until the Rix, machine-augmented humans who worship very different gods: AI compound minds of planetary extent. The Rix are cool, relentless fanatics, and their only goal is to propagate such AIs throughout the galaxy. They seek to end, by any means necessary, the Emperor’s prolonged tyranny of one and supplant it with an eternal cybernetic dynasty of their own. They begin by taking the Child Empress hostage. Captain Laurent Zai of the Imperial Frigate Lynx is tasked with her rescue.

Separated by light-years, bound by an unlikely love, Zai and pacifist senator Nara Oxham must each in their own way, face the challenge of the Rix, and they each will hold the fate of the empire in their hands. The Risen Empire is the first great space opera of the twenty-first century.

Review: Some books take a while to really get going, and some books throw you into the action from page one. This book was one of the latter. It opens with a thrilling space battle with a completely unexpected twist, and had me completely hooked from the get-go.

This is hard science-fiction (as opposed to the science fantasy from authors such as Jack Vance), with space travel at percentage-of-lightspeed, advanced technologies that sound scientific and plausible, and a suitably advanced culture that is completely believable. One of the coolest technologies is the synesthetic implant that everyone receives as standard, and which allows data to be viewed through the other senses a human possesses. Throughout the novel people see the real world in primary sight and have overlays in secondary and sometimes even tertiary sight, and it sounds pretty awesome. I also loved how there are four types of gravity: hard, easy, wicked and lovely. You’ll have to read the book for explanations of how they all work.

At the centre of the novel is the Empire of eighty worlds, ruled by the Risen Emperor and his sister, the Child Empress. The Emperor has done the impossible: he has found a way to conquer death and grant eternal life by means of a symbiotic implant, though this implant only works on dead people. This gift of immortality is controlled by the Emperor, and he has had absolute power over the eighty worlds for sixteen hundred years.

In contrast to this are the Rix, ‘enhanced’ humans who worship their planetary compound minds and wish to seed these AIs on every inhabited planet in the universe. Caught in the middle is Captain Laurent Zai, who is tasked with rescuing the Empress when she is taken hostage by the Rix.

This book has so much going for it that it’s hard to pin it all down. There is a thrilling space battle that takes up a big chunk of the book and at times takes place in microseconds, yet never gets boring. There is a good dose of politics, contrasting the unbending traditionalism of the Risen and their grey worlds with the pinks: those who believe that to be immortal is to be stagnant, and who would take the power away from the Risen. There is romance, in the form of the relationship between Zai and his lover Nara Oxham, a Senator from one of the pink planets. It introduces the concept of the Time Thief, the effect that the military experiences due to traveling throughout the universe at relativistic speeds. In essence this means that if they spend two years traveling at, say, ten percent of the speed of light, ten years may have passed in absolute time. Ten years relative to them could be fifty years absolute, so any family left at home will age and die long before they do.

I usually prefer to read fantasy over sci-fi, but when I do grab a sci-fi novel, this is the kind of novel that does it for me. Gripping from start to finish, and I can’t wait to read the conclusion.